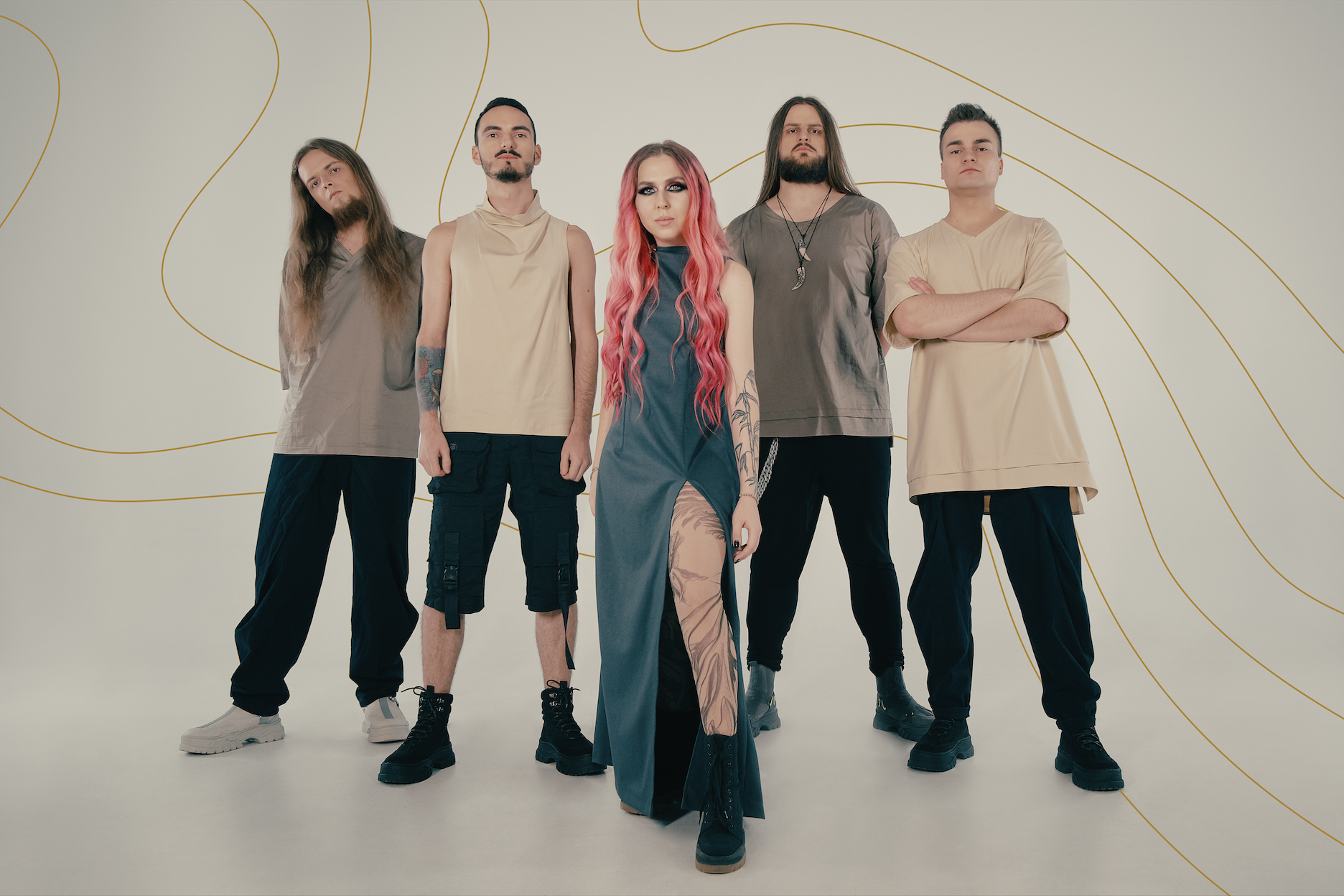 Some time ago, SKULL NEWS presented the new album The Realms of Fire and Death by IGNEA. Today, their charismatic and versatile vocalist Helle virtually sat down with us to discuss where the Ukrainian band gets their inspiration from.

SKULL NEWS: Thank you so much for agreeing to do an interview! We are very curious to know more about the album.

SKULL NEWS: First thing is obvious to ask: How did you get the idea to write one song in your mother tongue Ukrainian?

HELLE : It wasn’t done on purpose and it wasn’t the goal itself. It’s just listening to the instrumental part, we thought that Ukrainian somehow suits this song more, and we decided to experiment.

SKULL NEWS: How did it feel to sing in your own language?

HELLE: Quite strange at first because I’m more used to metal in English but for this particular song, it was great. I also can say that my voice sounds a bit different and it’s really easier to sing in Ukrainian because we’ve got more open vowels, which is easier to vocalize. I think it’s the same situation with Italian, for example.

HELLE: No, it was written in Ukrainian first and we were actually playing this song for 2 years before the release of the album. But I thought that an English version would be cool because it’s a concept album and I’d like people to understand what it is about. And also I’m good at translating rhymed texts, so why not.

SKULL NEWS: Have you ever thought about writing a whole album in Ukrainian? You know, Marko Hietala of Nightwish has recently done that, released the album of his solo project in Finnish first and then in English. Would that be something for IGNEA?

HELLE: Yes, we know that Opeth also released their album in Swedish and English, Eivør — in Faroese and English, so it’s not that rare. However, in our humble opinion, our music works better with English, so we think that it is going to remain the main language for us. But, based on very positive feedback on our Ukrainian song, we will definitely try to make some other songs in our mother tongue, if we feel so.

SKULL NEWS: About the album, The Realms of Fire and Death together with the band name … has this subject been a plan ever since?

HELLE: I wouldn’t say we were thinking of it for a long time. The concept of this album came to me while writing texts to the instrumentals. But I think that this idea of burning and fiery has always been there for us. So, it was probably a matter of time.

SKULL NEWS: How did you get the idea for the band name anyway?

HELLE: Initially, we were called Parallax, which was more suitable for our first EP Sputnik that was space-themed. Then, we started growing as a band. It was hard promoting it while there were over 60 other bands called Parallax, and also, our music started to sound differently. IGNEA was one of the band names offered by Evgeny, and we thought it’s just what we needed.

SKULL NEWS: We absolutely love the concept of having these fantastic stories and the coherence between the songs. We imagine it quite a challenge to write such a complex album. Is this a reason why you took quite a while to create it?

HELLE: There are numerous reasons for that. After The Sign of Faith, we almost lost a year because back then we didn’t have a decent booking agency, and we literally were sitting at home, only playing some local shows and festivals. Then, on contrary, we signed a deal with The Flaming Arts Agency, and 2018 was our touring year with that album. In autumn 2018, we started putting down the new album piece by piece but there was still a lot to work on. We also toured in 2019 and would record it much earlier but our sound producer was booked, and we still had things to work on, as well as to gather the needed finances for that. Also, when we decided to make a concept album, we understood that it required a more thorough work and time.

SKULL NEWS: Where did you get the inspiration for the lyrics and stories from?

HELLE: I can never say exactly where the inspiration comes from. Sometimes it just strikes you. Sometimes I re-listen to the song over and over again and just see where my imagination takes me. So, there’s absolutely nothing in particular. But the themes of fire and death were always captivating me, so maybe I was capturing the ideas unintentionally whenever I was watching something, or reading something in the past.

SKULL NEWS: Are you referring to Ukrainian folktales? Literature or movies?

HELLE: No, everything is an absolute fiction without any references to any existing creations or history.

SKULL NEWS: For you personally, what role do stories play in your lives (f.e. in your childhood?)?

HELLE: I started to talk, read, and write at a very young age, so I love good story-telling a lot. And I also enjoy listening to the bands that have a story to tell.

SKULL NEWS: In the stories of the album are several very strong female characters, like the Queen, the dead wife, and the sister. And on the album cover, there’s a female figure. Is there a reason for these choices? What role have women in the album?

HELLE: We never make an emphasis on the gender cause we feel that the true equality comes when no one focuses on that. Nowadays, people love to have more women in every place because they feel that it’s more fair. I mean, in movies, workplace, etc. However, I believe that people should be chosen by their skills, not by gender. I know that a lot of women suffered because of the inequality and, in some countries, it’s still happening. But, in my opinion, a lot of things are exaggerated these days. And I certainly wasn’t putting women as characters on purpose. I think, there are enough male characters there as well. It’s just what came to my mind.

SKULL NEWS: Another strong motive is all sorts of suffering. … ?

HELLE: Maybe this is what you saw in it, probably just like everybody else sees what appeals to them, what catches their attention. The album is about fire and death. Death is suffering, to some extent. For those who are left without their loved ones, for example. I guess, there’s no death without suffering.

SKULL NEWS: Yeah, isn’t this a good sign, that your music is complex and inspiring imagination? What is very surprising is that the stories of the songs are all situated in an ancient past, but IGNEA has a very fresh and modern metal sound. Would you say that this is a trademark of the band?

HELLE: It can be a trademark of this album but we don’t know what comes next. However, I doubt we’ll ever sound old school, cause this won’t fit our music and ourselves.

SKULL NEWS: Also a musical element, that seems to define the IGNEA sound, are references to oriental cultures. How and why?

HELLE: Evgeny is our composer and he loves middle-eastern sound and melodies. We don’t have any oriental roots in the band but it’s something that we love hearing and playing. Also, no one asks bands from all over the world, why they play Viking metal or relate to Northern cultures. Yet, we receive this question all the time. Perhaps, because it’s not that wide-spread. Which isn’t bad, right? Also, like Evgeny loves to tell, oriental music has an interesting musical structure. The same notes can sound both sadly and cheerfully, which you can hardly get with the ordinary classical major and minor.

SKULL NEWS: You announced to publish a book that will contain the whole stories – so the interference of music and literature in IGNEA will become even more intense. Are there any books that you find particularly inspiring for writing songs for the ban?

HELLE: This book is already out and it’s really very short stories that allow to dive into the album a bit deeper. Like an extended lyric book. I’m not sure it’s going to be the same for the next albums but we’ll see.  I love to read but, just like said in the answer about inspiration, to write a book, you don’t necessarily have to be inspired by another book. Usually, it’s even the opposite.

SKULL NEWS: Do you have any news about the book? Date of publication? Ways to pre-order etc.?

HELLE: It’s available in our store in printed version and you can also get an e-book and an audio version of it by becoming our patron on Patreon.

SKULL NEWS: What are your plans for the next months?

HELLE: We were planning to tour but it’s not possible for us with the current situation. Thus, we’re going to release one more music video for the song ‘Jinnslammer’, the shooting for which happened back in November. And we’re also working on some kind of live video session but we’ll have more details once we figure it out. We have some tour dates planned for November but we’re closely following the situation. Right now, it’s hard to say whether it happens. And we’ll definitely continue creating things for our Patreon page.

SKULL NEWS: Thank you again for your time and help! We wish you a great success of the album and hope to see you on stage very soon! Until then, stay strong, stay cheerful and healthy!

HELLE: Thank you for spreading the word about our band and hope to see you at our shows as well. Stay safe!