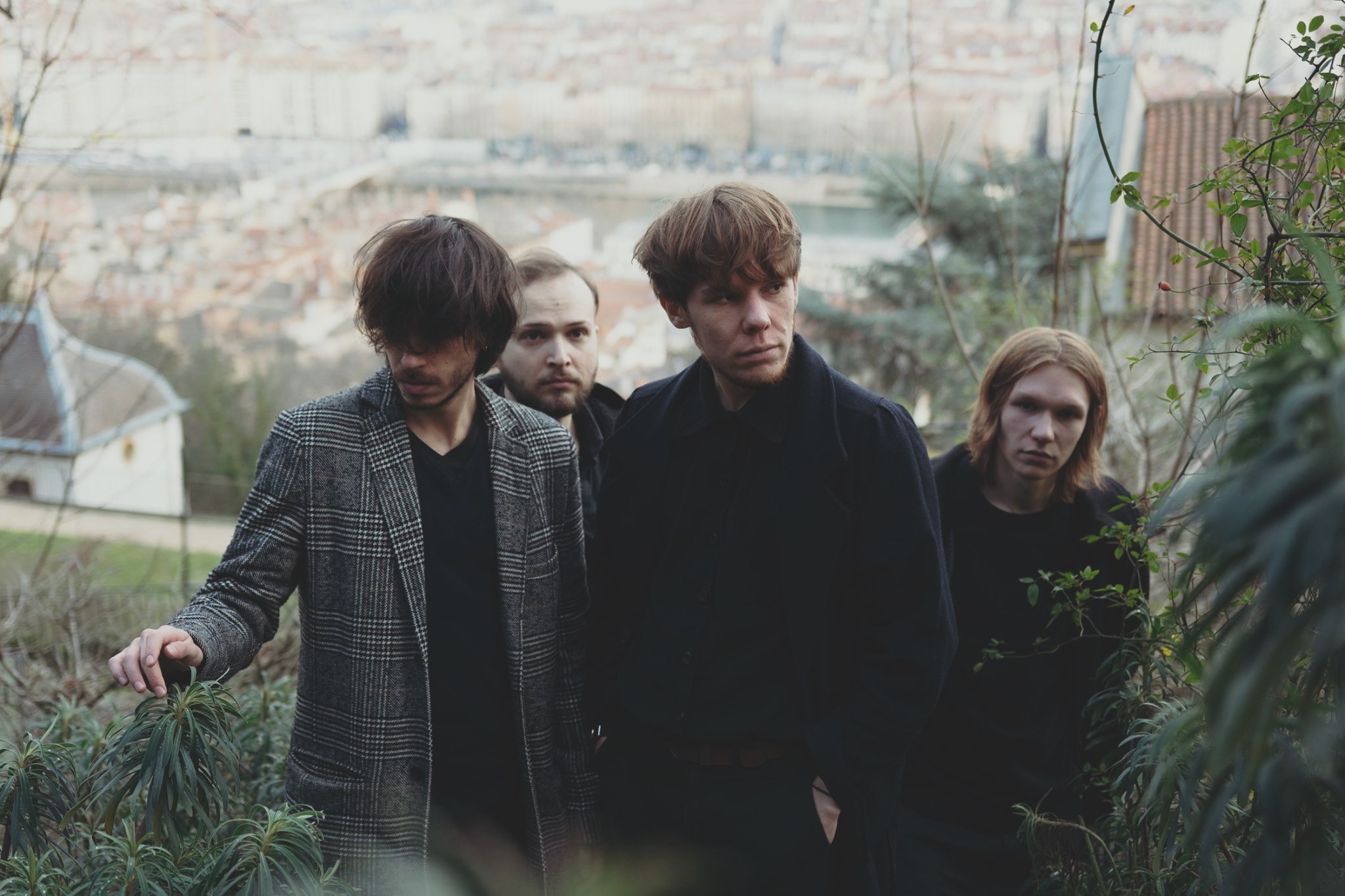 Here is the german version

Almost 3 years ago, VAGUES, the young French band, released its EP “Depuis Les Toits”, an EP that made us travel, a dreamlike poetry, a sound bewitching the listening souls: excellent tracks such as “Naufrage” or “Envol”. VAGUES is a band from Lyon, a young quartet with a lot of promise writing their music, most of the time during improvisations. Embracing the aesthetics of the “Shoegaze” movement, VAGUES proposes a musical style influenced by Post-Rock, committed, very hypnotic, ready to travel, while incorporating energetic musical passages, with distorted, sometimes dissonant guitar riffs, accompanied by very sustained and percussive rhythms.

VAGUES comes back in this year 2020 with a brand new EP scheduled for October 23rd, entitled “Aux Portes de La Nuit”. Today on SKULL NEWS, we’ll see what it’s all about. (Anecdote for our non-French speaking readers, VAGUES means waves.)

This EP has a paradoxical atmosphere, at the same time very soft and tumultuous. One feels a strong nostalgia on most of the tracks. Sumptuous refrains on “Dernier Virage”, a melancholic tone and instruments that give rise to a nascent hope. “Impasses” follow this first track with a more sustained rhythm, very pure guitars. For this piece, the chorus gives us the impression to be in a whirlwind of emotions, a real flight with choruses, the whole underlined by breaks of rhythm before each one of them. “Dernier Virage” and “Impasses” are big highlights of the album, a superb division between sweet and melancholic moments, and others where VAGUES breaks through with a sustained rhythm and a dissonant sound, giving good rales of energy!

“Grand Incendie” is one of the first tracks of VAGUES, already released in demo on June 28, 2017 on YouTube. It comes back on this EP, in a more worked out, deeper form, we feel the progress and the work done by VAGUES! This track is a sweetness but beware you will be surprised by this pre-ending bridge and the final blast! The sequence gives goose bumps! We really let ourselves be carried away by the music !

There are also very experimental tracks like “Le Velours du Soir”, typical of Post-Rock, a very heavy, calm atmosphere with a whole that accelerates at the end. “La Tempête” as for it, is very interesting, it’s the most energetic track of the album: a very good bass line in the hand riff, good rock! A chorus with sinuous and slender vocals, an instrumental bridge that precedes a long-committed message from the singer. On this track one feels as if one is on a ship facing a violent storm, in an ocean where uncertainty and inevitability reign supreme. A strong message, wonderfully interpreted by Yann Ponthus (singer), which will revolt you with an inevitable questioning of this reality that is violently thrown in your face. You feel a palette of emotions and strong sensations, such as fear, melancholy and danger. “La Tempête” will not leave you insensitive.

VAGUES is a band that is a pleasure to listen to, a music full of meaning, whether in the poetry of the lyrics or in the musical technique used. We have a coherent whole transmitting a maximum of emotions. In general, the music of VAGUES makes us travel, we find a lexical field very centered on nature, the sea, lightness. There is a very good distribution at the level of the structure of the pieces, we can go from a very calm moment to a sudden flight or pulsation realized by the orchestra, we have the impression that everything shakes at these moments, and this is what gives the energy and the charm to the titles of VAGUES !

When we listen to VAGUES, we plunge into a feeling of nostalgia, the music is deep, certainly melancholic, but we can’t help but feel a glimmer of hope.

Live the experience, let yourself be rocked by the WAVES, and don’t forget your life jacket, because you will go through storms.

See you soon on SKULL NEWS!

You can buy the EP, and support VAGUES here